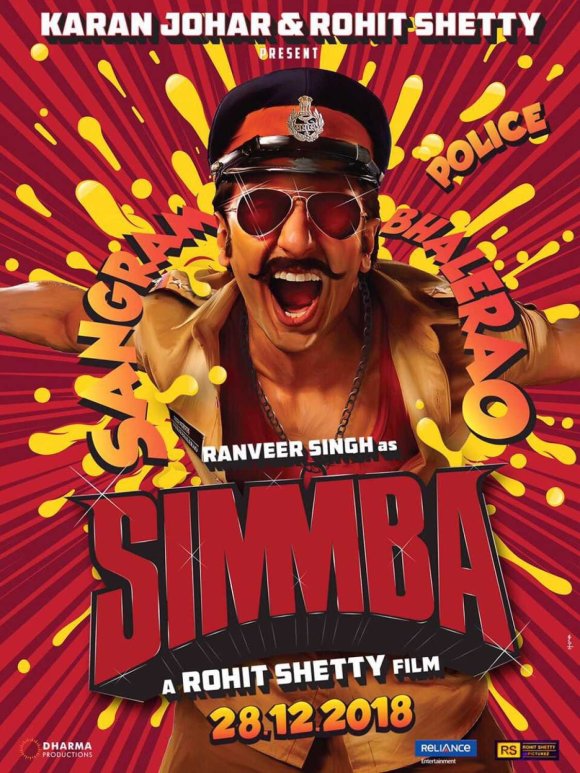 If there was a movie which could have had ‘OTT’ as a catch phrase it would be this one. Or it could have the slightly longer but also accurate one of ‘The Movie Where Rohit Shetty Didn’t Blow A Car Up’. Whatever be the case, Simmba is a movie that is unadulterated entertainment. The kind that harks back to the days when we whistled as the hero made an entrance for the first time and blew everyone else away!
Seemingly tailor-made for Ranveer Singh R.S), Simmba is the story of a cop gone wrong who changes his ways when tragedy hits a bit too close to home for his comfort.

With unabashed cheesy dialogues and catch phrases, R.S is the epitome of a mast, bindaas guy who is always looking for his pound of flesh. Life’ taught him that crime does pay and if you wear a uniform while committing the crime, it pays even more! With endless amounts of pomade and clothes as tight as Akshay Kumar in his Churakey Dil Mera days, Singh delivers the goods in the movie.

Ashutosh Rana in a middle-aged form; plays the voice of R.S’s conscience. The only other cast member to have significant screen time and have something else to do barring looking pretty is Sonu Sood. He growls, barks, threatens and flexes his biceps menacingly in an unending series of muscle shirts.

Sara Ali Khan is a prop plain and simple. She prances in with a bouncy ponytail and then steps back and lets R.S run amok. Because that in a nutshell is Simmba-in your face, brash and total paisa vasool. It’s like an 90s movie in this age with two famous remixed songs to prove it.

Should you watch it? Absolutely! You’ll leave the hall dancing and laughing- what else does one want from an action packed flick?