A highly caffeinated and enthusiastic mother greets her only offspring first thing in the morning.

Seeing the zombie walk, the groggy look and the utterly gorgeous lashes fan his cheeks she chirps,” Oh why are you so beautiful?!!”. And the child replies, “Because you made me.” “You bet your ass I made you!” “Hey! You said ASS!! “You bet your ass I did!”

Such is the love fueled by the Almighty Joe. *does we’re not worthy* and silently bows out of the room.

2019 was a very memorable year for me. And blogwise as well. Here’s how Ballisticbong did.

Why do I do this recap? Well barring the histrograms which show me ups and downs and consequently make me grin or arch an eyebrow, I know people do read even unfunny, informative posts.

So if you are a blogging veteran or someone who’s decided to put their digits to the keypad just now, know this, blogging is fun, engaging and very liberating.

Keep writing. Someone will read it for sure!

The year started on a fun enough note. Had plenty of adored people around. There was music. There was dancing. There were hyper kids. Loads of alcohol flowing as well. And lights flashing…the whole shebang!

And then we crashed, bleary-eyed, into bed only to be woken up at what seemed like an ungodly hour but it was actually well past the crack of dawn. Bang into the new year I realized what a smartass a 10 year old can be.

I have…sigh…had a rather favorite coffee mug that’d been a part of my everyday routine for more than 6 years. It was nothing fancy. Just a bright yellow mug with Homer Simpson’s face on it, full of his usual goofiness. I’d bought it during my first ‘mom’s weekend away’ trip with the bestie and it was intended for Red. I don’t remember how it became mine, but it did. So the mug broke fairly early in the morning although after I’d bonded with it for what turned out to be the last time and I was more than a “bit miffed”. He-who-shall-not-be-named had butterfingers as usual and had broken the mug just near his feet while not having any slippers on (as usual). Shards were everywhere and Homer was irreparably broken.

After having realized there were no more storms to come, TO saw me sweeping up the broken pieces and looking sad while doing so. In expressing solidarity with his “favorite mother” he stood in attention, clicked his heels together, saluted and hummed a mournful tune. I have never been more caught between looking stern and controlling my laughter at the same time. Laughter won out. Kids..whaddya gonna do!

Speaking of…guess what the kid who kept whining during most of the train journey to my hometown say when I asked him to shush for what must have been the n(nth)th time? ” Oh! so uptight!!” I’m fairly sure I goggled at him while he cackled and ran away like the sprite that he is.

I’m not setting too many goals this year barring one- minimalism. Wherever possible. Wherever…and of course targets will be set to travel more, read more, do new things and make more good memories.

May 2020 find you all in more states of contentment and as little tumult as possible.

Now, onto the movie! A lone wolf master spy and a lonely young brainiac scientist learn about each other and what it takes to be a team in this new offering from Blue Sky Studios. Will Smith is smooth as ever as Lance Sterling, the uber cool, unflappable, repartee-trading spy who always ‘flies solo’. Tom Holland with his vulnerable ‘young man’ voice as Walter Beckett come together and learn what it means to be friends, save the world and why pigeons are rather misunderstood and far more cooler than any of us every imagined.

It’s a fun movie with the kind of appeal fun that works with both the kids and the big kids in their lives. Check it out for the slick animation or if you simply like Will Smith…or pigeons! because this flick sends messages without being preachy, too uppity or without being too in your face about it. No spoilers here barring that there are LOTS of pigeons.

When wandering around the streets of Barcelona, near Sagrada Familia or the Arc de Triompf, you will come upon the church of Sant (St.) Joan (not a woman).

After seeing the style of Gaudi’s masterpiece, this church seems run of the mill but take a round of the place and discover it’s beauty and architecture for yourself. 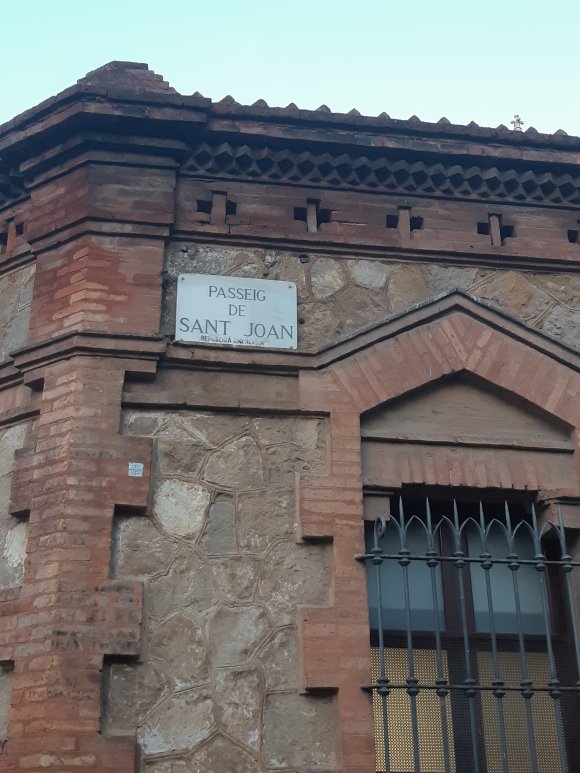 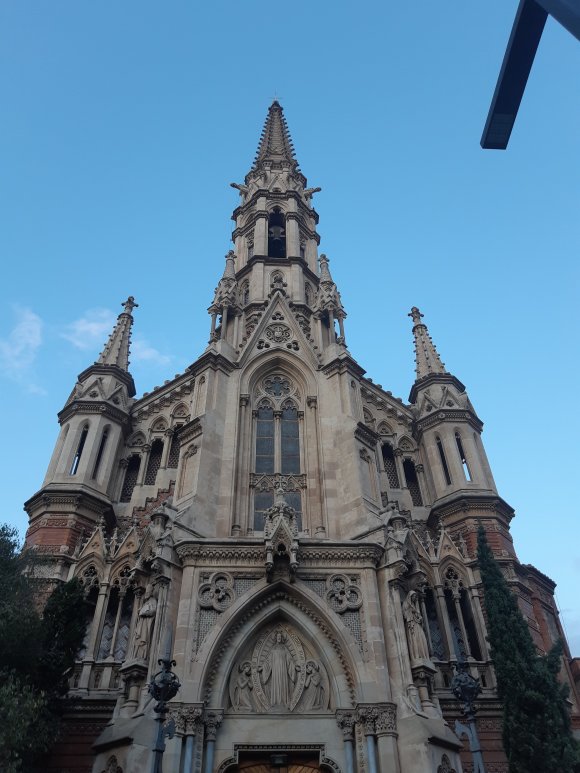 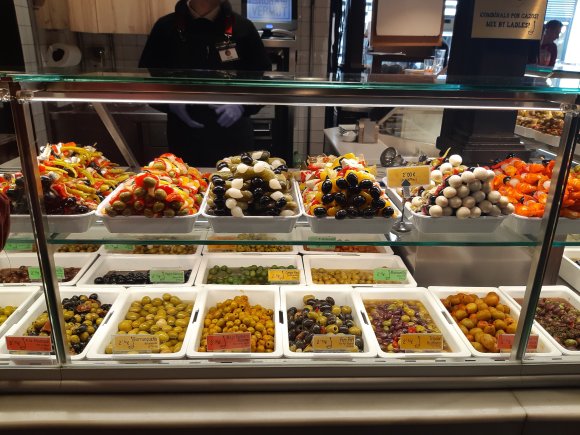 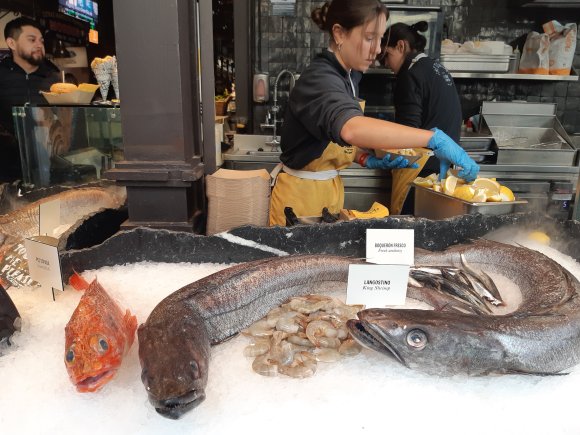 This was our last day in Barcelona. We decided to skip the beach in the less than balmy weather and spend the day in the Gothic Quarter instead. A good decision as it turned out.

Browsing through a flea market, listening to street musicians and having a perfect lunch in a quaint, hole-in-the-wall place in one of many warrens of the Gothic quartets was a leisurely way to see not just see the tourists but also see how the locals look at the likes of us. 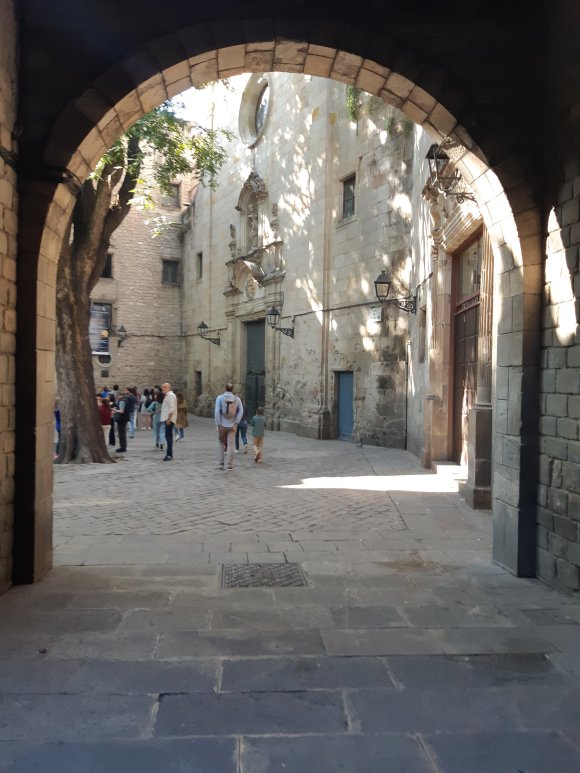 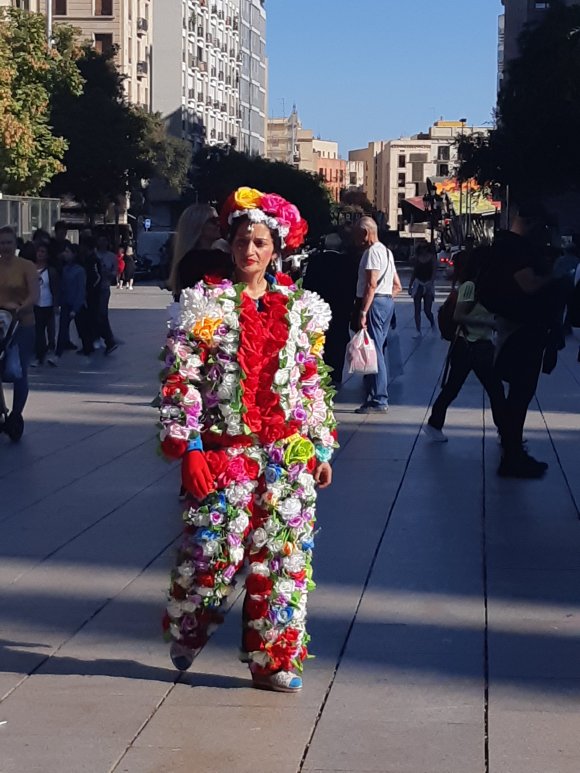 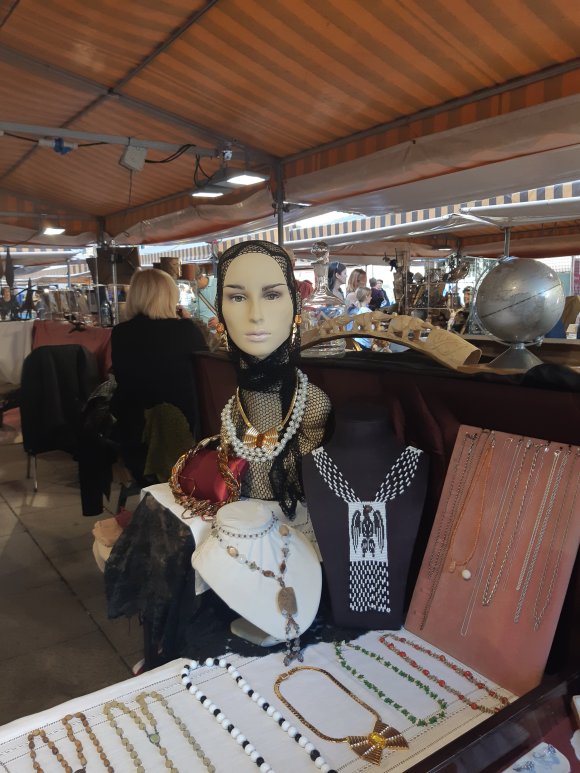 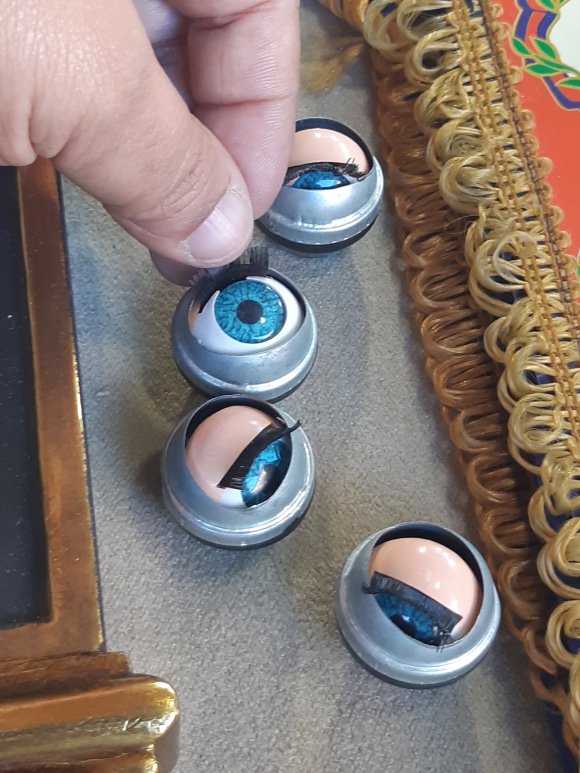 Gaudi and Barcelona are synonymous and even without anyone going too deep into the psyche or temperament of the artist, you can’t help but concede, the man had style! A glimpse of his masterpiece Sagrada Familia… 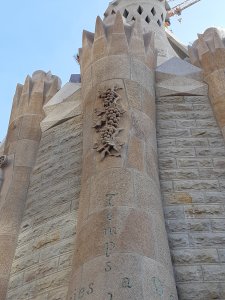 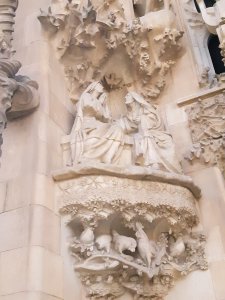 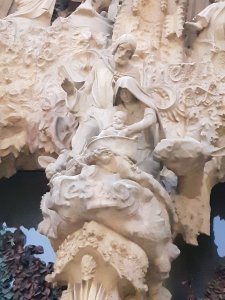 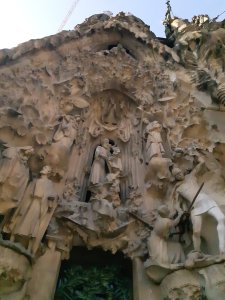 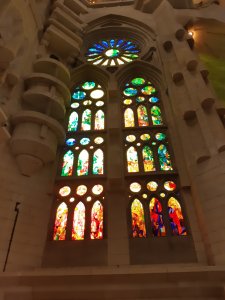 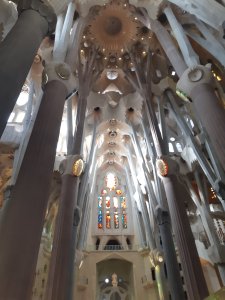 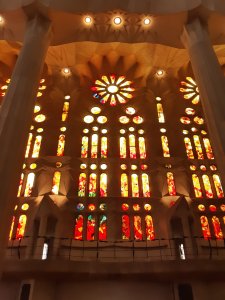 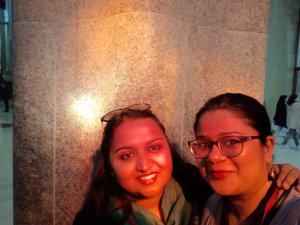 When I visit a new place, I don’t just focus on the well-known or even the off-the-beaten track kind of locales and sights; I like to capture the every day lives of the people there.

Here are some glimpses of Barcelona, the way the locales live. 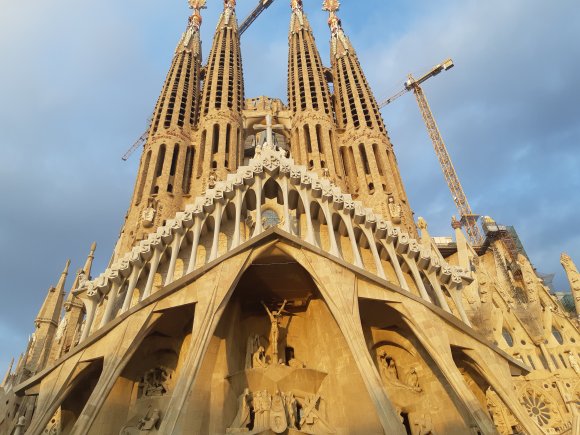 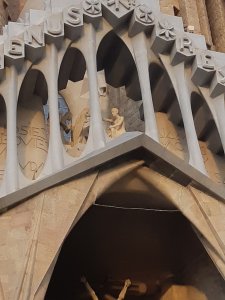 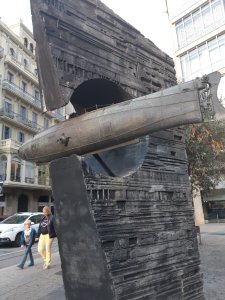 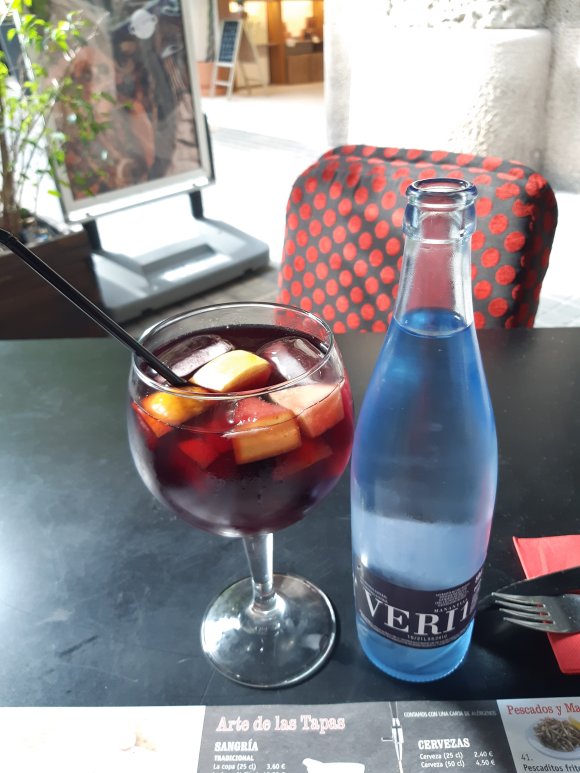 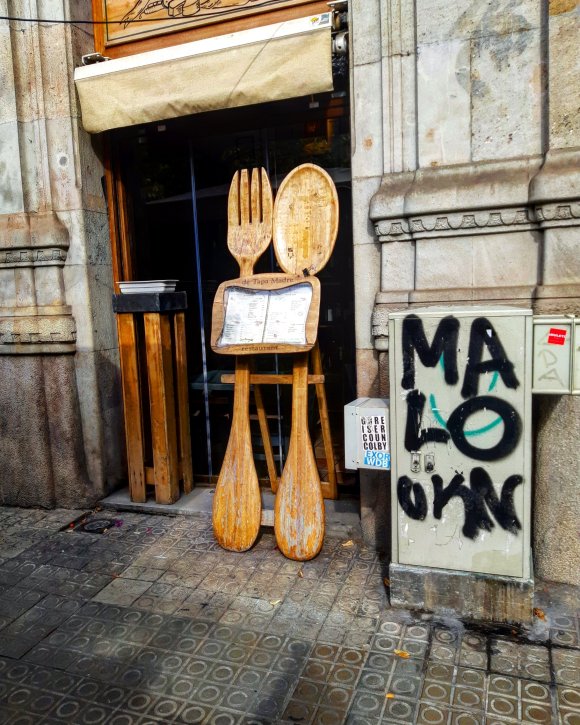 Doesn’t make sense? Or oddly enough, it totally does? Whatever be the case this is the story behind it.

My sister from her own parents and I met in college 21 years ago and since then had made countless plans to go travelling together. Over the years, decades really, we have visited each other many times but never been able to get ‘our own trip’ off the ground. With a milestone birthday coming up for both of us, hers before mine, we decided that tomorrow never comes and today is what it’s all about….so a girls’ trip is taking place. One which isn’t falling through!

For the past 5 months we’ve bored the spouses thoroughly discussing places to visit and then what to do when we get there. And after 5 months of researches, plans and spending more time chatting and talking to each other than we have in all these years combined (time zones be damned!), the day is finally arrived…I’m enroute and she’s going to be starting off soon as well.

With Red happily pushing me out the door this morning and saying “Don’t calling me, you’re on vacation”, I’ve completed one leg of the journey and am about to start on the second leg shortly. The flight started with a surprise upgrade to better seats and deliciously-warm and eau-de-cologne scented towel to pushing all the seat buttons to see what each one did. Tt’s a gleeful time! I’m fairly sure I bounced once or twice.

Of course, me being me, I met my share of “interesting” people along the way as ever. Starting with the airport security guard who saw my ticket and got enthused because he’s a huge soccer fan and am off to a major soccer hub, to the elderly Arabic gent who kept tutting disapprovingly at the violent movie and booze that I consumed right in front of him, it’s been quite fun.

P.S: Reached Barcelona and had one of my country people as my cab driver. Waiting for the other half to arrive so we can finally kick things off good and proper!

Watch this spot for more updates!Ole!