Being a parent (as I say a few hundred times in a week) is like nuthin’ else!

You don’t know when you’ll be sucker punched or melt in a puddle of treacly sweet mushiness; all by the actions of the person you call… The Offspring!

Last night friends of ours decided to head out for a dinner. What’s special about this dinner you ask? Well it was the first time they were heading out to eat in a restaurant after their daughter was born; roughly one and a half years ago. And it’s not that she’s high maintenance, FAR from it. Red and I can co-author books on high maintenance kids without breaking a sweat. This little girl doesn’t need too many things to capture her fancy, CAN SIT STILL ( a skill my 4-year-old has yet to master) and is overall- a GOOD child.

So off we went with them. We dressed up nice. It was Christmas dinner after all. The eatery was good too but not so pish posh that you need to worry about using the right kind of cutlery.

And a mini disaster struck! Their erstwhile well-behaved child hadn’t napped in the afternoon and the disruption of her routine led her to be fairly cranky! Well that and a poopy diaper they hadn’t discovered for a while led the parents to try and calm her down in many ways indeed.

After a while it was a simple can of Coke that kept her occupied and happy and we wrapped up a bit early so the kids could conk off and we parents could rediscover that realm that one has to be a parent to understand- The Realm Of The Sleeping Child. Oh..tis sweet indeed!

Red and I, after some EPIC, EPIC debacles at various eateries, malls and God knows where else have fallen back on ordering in and not really going out much with MLM unless we REALLY need a break or we’re fairly certain that some amount of control can be exerted upon him and the situation.

We go to places we know will cater to his kind of food and dessert and will not distract him to the extent where we both run relays in tracking him down and fastening him back to his seat.

But kids really are an uncomplicated lot once you accept that for them it’s not about logic that rules the roost- it’s their wants. We tend to rationalize between our needs and wants and this gentleman has done extensive work in defining both. For example a recent trip to the mall made MLM realize that he couldn’t do without a creepy, green inflated T-Rex. That reptile’s guarding my living room even now where the sudden silhouette of it looming up has startled me once or twice. But go figure! They watch t.v. together (the hurricane and the extinct lizard), it waits for MLM to finish his bath, MLM has tried to sit on it unsuccessfully a few times as well but you can’t miss the love! Inexplicable as it is.

And what is even more inexplicable is the immediate release of tension, irritability and frustration that a parent feels the moment they gaze upon the face of their sleeping child. It’s really as if all right with the world.

So we march on. With tough times and fantastic ones too. Trying to wing it and often equipped with T-Rexs to make the world of parenting a happier place. 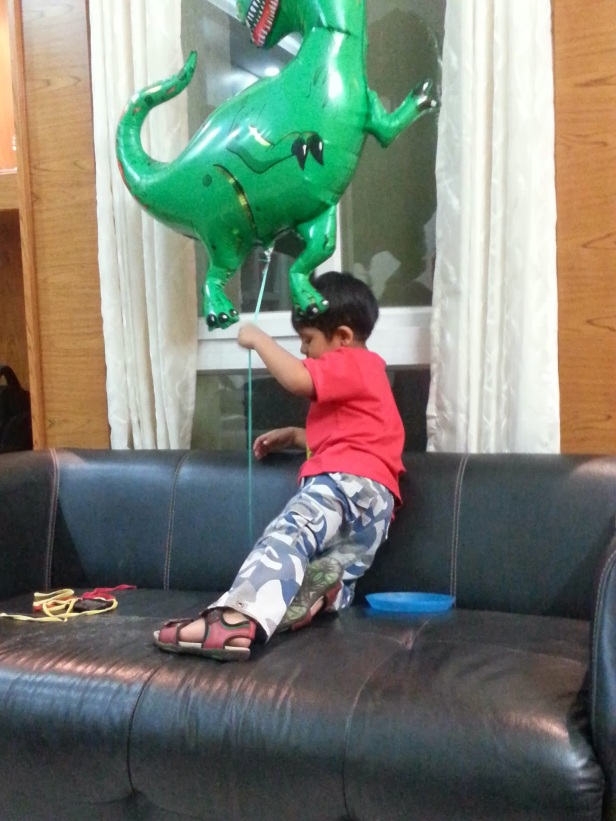