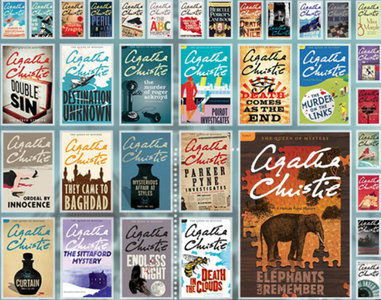 I am an Agatha Christie aficionado. Rather an afficianado of the characters she has created. I haven’t read up much about her life per se but somehow I pictured her to be a bit like the wax statue of Miss Marple I’d seen in Madam Tussaud’s years ago.

The back cover of her books proved that she was neither that fluffy or was she that sweet-looking old lady of my imagination. But be as that may, I think an author’s legacy ought speak for itself in the books they’ve published rather than someone else hoisting a flag on their behalf; with books that haven’t sprung forth from the original grey matter.

With equal part reluctance and curiosity I bought a paperback of Closed Casket and I stuck to, reading till the end out of sheer stubbornness because truth be told, Sophie Hannah lost me somewhere in soon after the first 20-odd pages.

Agatha Christie’s prose is not torturous. You don’t have to be a connoisseur of the English language nor of the crime and mystery genre to get engrossed in her books. Hannah’s prose, the twists and turns were quite taxing and the kind of play or words done for ‘closed casket’ was worthy of a conceit of John Donne himself!

Her book has a darker feel to it than Christie’s typically do but with half the enjoyment that I’m accustomed to.

So I’ll stick to being a Christie purist and reread (for the nth time) my Poirot and Marple novels. They’re the real deal.