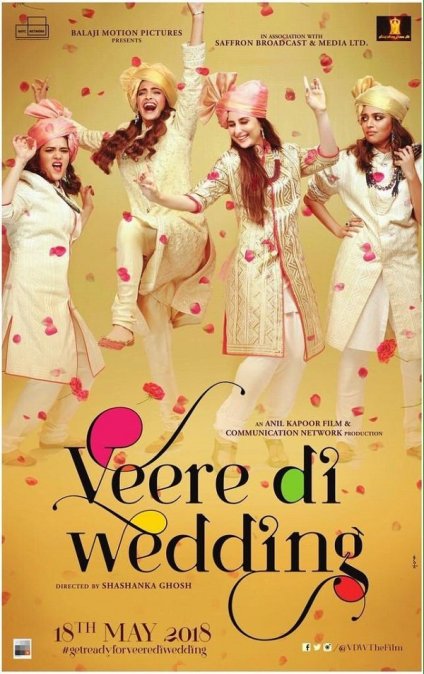 I almost didn’t watch this movie. Kareena Kapoor, Sonam Kapoor aren’t quite the draw for me personally. Add to it, the reviews had been less than stellar and I didn’t want to watch a badly made chick-flick when I could use those 2 hours to sleep or read instead…color me pleasantly surprised!

Now this movie isn’t a must-watch or even a repeat-watch but for a one-time watch with a buncha gals or even guys who get the Punju colloquialisms, it’s worth the money. The rest of the movie is about relationships. Between friends who become family. Between parent and child and definitely between a woman today and the world around her.- Bottom line? It’s entertaining and that’s what’s to be remembered about movies. Thought-provoking or not-they serve to entertain.

Is this movie hatke? Well…it is woman-centric for one. Guys are a part of their lives the same way they happen to be in real-life rather than a larger-than life reel-life man with bulging muscles who romances onscreen for a 3-minute song spanning from Switzerland to Botswana with 5 attire changes which often includes a sari pallu longer than Princess Diana’s wedding train. Phew! Head-spinning global lau (Gujju-ishtlye love).

This is a story about women who are believable; especially in this day and age. There are plenty of them out there who run from marriage, structure, socially sanctioned relationships and having to do Mata ki chowki at the drop of a pin! And Bollywood being Bollywood, would have them all be from the upper crest as well so impromptu trips abroad are also viable.

I was watching this movie with a Dally-based (aka New Delhi) friend (she’s a veere too I guess if one goes by the definition in this movie) and she, amidst gales of laughter, assured me the depiction of Wast (West) Dally (Delhi) was a very apt caricature.

And let’s not even get to the bling…if there’s no bling, there’s no big fat Indian wedding at all. All families have their skeletons and dirty secrets, every couple has stuff that rips at their seams, every girl is prevailed upon at some point in her life to “get-married already” by her mother. Same as the characters in VDW.

I’d read somewhere that the F-bombs in the movie seemed contrived or excessive. I guess it’s a matter of perspective. My gal pal reminded me how “unpolished” my own speech was before the advent of motherhood. It contained allusions to human anatomy and mothers and sisters quite a bit. Something I engage in now primarily while driving.

I think people should watch this movie. It’s fun. It has a lively pace. It’s not excessively dramatic or melodramatic and I made a fun memory watching it with someone with whom I have a 17-year-old history. That’s what makes this movie relevant. It won’t win Oscars. But it wasn’t meant to.

I left the theater dancing and laughing. Paisa vasool.