My kid thinks I’m blind AND dumb. If he didn’t, why on earth would he cut off a clump of hair that he couldn’t untangle instead of bringing it to his mother who’s so damn handy with a comb and also when we have a detangler spray handy as well? My face is going to have permanent indentations from all my facepalming.

Anyhoo, two days ago TO walks up to me very nonchalantly and asks for screentime access when I notice a lopsided part of his hair. On asking him what happened to his hair he goes coy and says “nothing” and then once I poke him on the bald spot he can no longer deny, he tells me how it was hurting him to comb his hair and he just cut it to make easier on himself. 🙄

After making it clear to him that a combover wasn’t something he should have to consider in this tender age, he agreed to get his hair cut so it would seem nice and even and less like male pattern baldness was setting in for a 10-year old.

At the parlor however, his desire to look funky had to be recalibrated because he didn’t have enough of floopy hair left on top to have a mohawk or even a mushroom cloud-like shape. What was inevitable was a bootcamp look. Ye Gods. 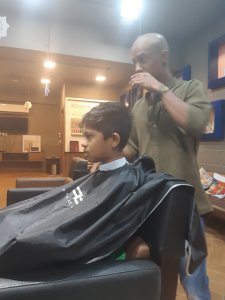 Am sure we’ll be visiting the stylist again, soon, for yet another hair dilemma. As I was telling someone yesterday, he went from pretty to butch in a single snip!