I haven’t ventured down the path to graphic novels at all. Parted ways with comics after grade school and just the written word was enough to hold my attention without needing the bells and whistles that illustrations provide.

However, the senses must be appeased and of late I’ve wanted to have more visual stimulations while reading. Amazon came to the rescue with their curated list of graphic novels for beginnings, spanning genres (Go Amazon!) and I picked up a book that I’d heard a lot about but avoided reading purely because of my own biases. 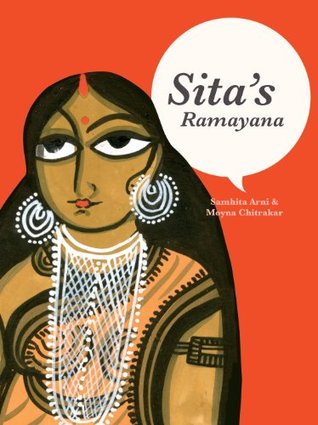 I need to mention these biases because they form a part of what leads me towards and away from books with topics such as these.

As a child, many of my Sundays were dominated by watching the dramatized version of Ramayana on the telly. Apart from the slow pace and the excessive posturing or smiling on part of the characters; it always felt like Ram was quite the goody-two shoes and his wife excessively pure and perpetually giving in to his whims and fancies. Added to the mix was my mother’s staunch belief about not just looking at one source as the definitive stance on how things might play out. She advised me to read other books which gave contrary views on Ravan, Sita and Ram instead of taking them as flawed or perfect in entirety.

Growing up in a country that largely espouses one religion, it’s tough to express one’s own contrary thoughts about a historical, mythological figure without ending up on some evangelist’s hit list or having to dodge trolling from all and sundry who seem to have drunk from the same spiked punch bowl of jingoistic fervor; not having one original thought in their heads, ever.

Here endeth the anecdotal part of the book review. Onto the actual book itself. It’s a delight. Visually. It’s a delight in its simplicity. Samhita Arni (the author) and Moyna Chitrakar’s (the illustrator-storyteller) collaboration is a visual delight that doesn’t detract from the story that has been retold many times over. The book is actually two-fold in that the words and pictures both paint a story that’s being told simultaneously; without one tripping up the other. They are in sync beautifully.

The narrative is very simple but not simplistic and manages to convey a lot of emotion without spelling everything out. The injustices of war, the machinations of man come to life in ink- both words and drawn.

I would recommend this book as a coffee table gift for friends and family. It doesn’t mean one is embracing their (Hindu) religious identity. But for better or for worse, Ram, Sita and Ravan are a part of our cultural identities. If not for that, get it for the artwork alone…it’s folksy, bold and timeless.