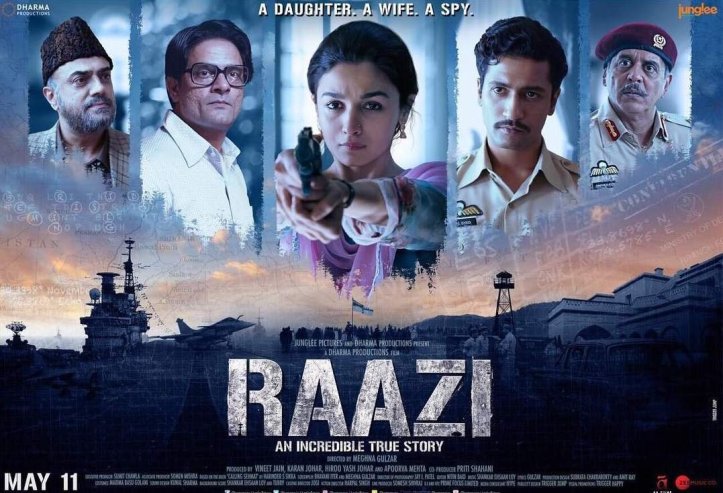 Meghana Gulzar’s making a name for herself in tackling the tough topics people talk about, wonder about but don’t always want to dramatize for a Bollywood consumer; their usual diet being movie that have 5 songs, dancing on mountains and always a happy ending.

With Raazi she achieves a narrative that doesn’t falter, she touches on patriotism without becoming rabid and she coaxes good performances out of her already capable cast.

The movie however, isn’t superlative. Alia’s fear, vulnerability and soldiering on in the face of danger is portrayed well enough. But is it a very taut performance? Not entirely. Her constantly looking around and observing the comings and goings while she spies, is a bit obvious and repetitive. Her guilt at the extreme step of taking a life is also portrayed quite convincingly. People who help her shine are actors I hadn’t come across earlier but who clearly are good at their craft viz Jaideep Ahlawat. Arif Zakaria is underutilized in his role. He of the expressive eyes and the rhetoric, could have been given a better deal in this movie. He’s sadly almost a prop.

Soni Razdan, Rajit Kapur, Shishir Sharma come in when they’re supposed to, do their bit and leave but barring Shishir Sharma they don’t really have any meaty roles or dialogues and are around to hold up their bit in the story.

So what’s good about the movie? The dialogues, the OST (Dilbaro is a song one can listen to again and again), Alia, the locales, the restrained story telling and not portraying Pakistan as the Devil’s Incarnate all adds up to an interesting watch. And with each movie, Alia proves how effortless she can slip in and out of roles in movies like Student of the Year, Highway, Badrinath ki Dulhania and Raazi. She has a good range of emotions and brings a freshness to her characterizations.

Will wait till the next Meghna Gulzar movie to see what else she has up her sleeve. This movie? 3 out of 5.