This is the first blog post from the new house so I guess am on my way to breaking it in.

We moved in last Monday and since then we encountered a level of displacement I’d left behind quite a few years back.

In any house or home there’s some amount of orderly disorder (except in my parents house. Disorder does not exist in their universe!) and since we know where everything is, right from the light switches to the safety pins you never feel lost.

In a brand new place despite packing boxes having labels on them, till you open them you don’t get a proper idea of where everything actually is.

So we moved in and continued with going to work for Red and school for MLM and descent in minor madness for me.

It isn’t just about getting those god-awful boxes out of the living room, it’s about the place looking like somewhere you belong, you want to be in…the erstwhile empty spaces should reflect the ideas you had in your head when you bought the place to begin with.

But it’s taken shape pretty well ( I think). Some of our things will need refurbishing-grubby little toddler is now semi-grubby preschooler and asks for tissues or runs into the bathroom to ‘wash your hands’ after eating so my sofa’s upholstery is no longer under attack.

We got the net connection up and running-YESS!!!

Red killed a lizard for me yesterday- YESS!! and EWWW!

The offspring has been to the playground everyday and has settled into a pattern of being around the new place. So the chants of ‘ Let’s go home’ have abated. He still calls it the ‘ New House’ but then again so do I, in my head i.e. Some of the moms in the play area have become familiar faces with some numbers having been exchanged as well.

We got cable, a help (for now) and have been able to access the maintenance service with a fairly short turnaround time so yeah…things are falling into place.

And we started to celebrate our first Diwali with our new neighbors last night and then conked off (don’t ask me when) and were deaf to the noises outside! How’s that for fatigue?

So right now, sitting at the new work station, typing this out feels pretty good 🙂

Here’s a glimpse of where we were at the start of this week and where we are now. 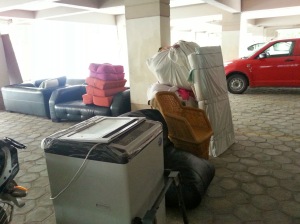 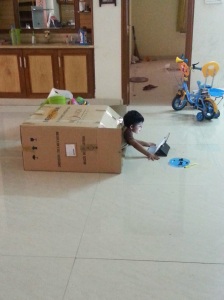 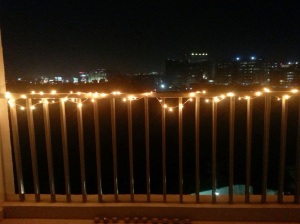 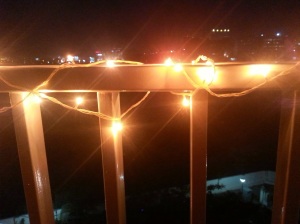